The Clintonville Farmers’ Market Kids Garden Club sold out their first market booth this morning! We brought a few pounds of new potatoes, a dozen or so cucumbers, bouquets of flowers and a few purple green beans (just for sharing as taste tests). The kids raised $50 which we’ll spend on provisions for an end of the season harvest party.

We organized the morning into three shifts – one hour each with two kids working each hour. It worked out well, no one had any meltdowns, no one got lost, all the kids got to interact with customers and one another as they learned new things, and we had fun!

I brought a bunch of activities to keep us busy.

A clipboard to tally our sales: 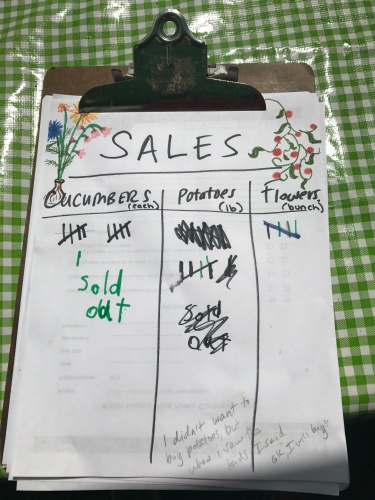 a scale to weigh things:

and buckets of flowers, jars, scissors, and string so they could arrange bouquets.

We discussed how to greet customers, did lots of addition and subtraction to figure out sales totals and make change, and thanked everyone with a smile. We’ll work on a few of these a little more before our next sale.

We didn’t get a ton of folks at our booth–we were a little hidden by a road block sign and often mistaken for the token booth sales booth–but those who did take the time to stop and say hi were excited about our project. One woman told me, “I didn’t want any potatoes today but then I saw the kids and I was like, “OK!”

We’ll be back at the market August 19th. Come see us!

After a week away, it was good to be back home and at work. Sadly we had ZERO rain, but thanks to our irrigation system, we’re still growing strong.

We’re continuing to enjoy scallions from various sites around the farm.

Roots are starting to come in

We harvested about 20 pounds of potatoes, from volunteer plants!

The last of the radicchio came out of this bed which is now interplanted with with a heat tolerant Sparx Romaine, ginger, Red Russian kale that is still going strong. 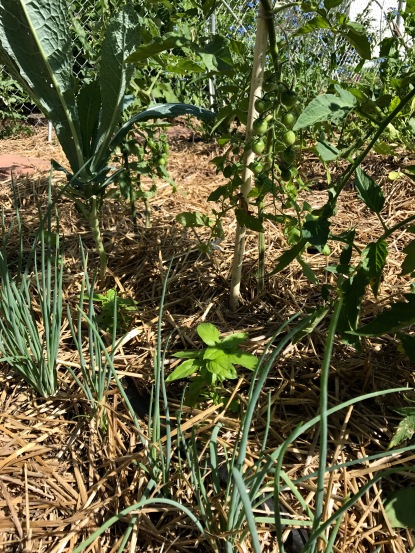 These winter sown onions are just about ready. (Wish we had about ten times more than we do!)

Mustard went to seed while we were away. So long…

Flowers are coming in to brighten everyone’s day!

This afternoon our CSA members turned up and knocked out some seriously good and important work. Here are a few highlights.

Sarah and Emily helped my harvest nearly 40 lbs of new potatoes. Then Melissa helped me replant the row with some quick growing haricot-vert and cilantro.

Carrie harvested beans that have already come in.

Liz and Melissa did some heavy weeding to help prep the old garlic bed for fall crops.

Elizabeth pruned basil and Sarah followed behind with fish fertilizer. 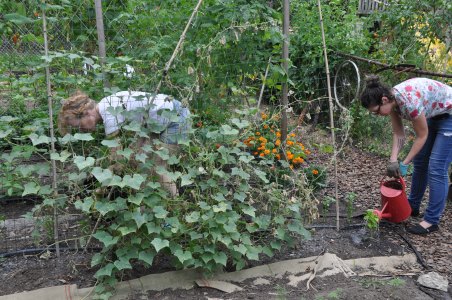 Pam worked her magic on the tomatoes.

And Andrew checked after the irrigation system.