[WARNING: This post contains both supremely cute and kinda icky imagery.  But it’s all real; nothing has been Photochopped folks. Understanding more each day that what it takes to get food to our tables isn’t always pretty, whether we’re talking about industrial pesticides or mousetraps. But I promise we’ll start on a positive note.

Shout outs to Melissa F. for pushing me to write about this here, and to Courtney at Milking Chickens who wrote so openly about her recent encounter with some stillborn goats.]

Meet Thompson. We’re told he’s some kind of terrier/hound mix so we’re counting on him to be our new vole (and rabbit and mole and squirrel and …) patrolman. 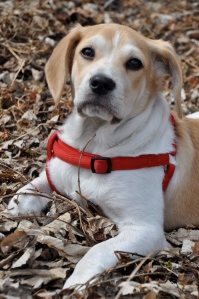 He’s four months old, super sweet, and a lot nicer to have around than our previous rodent trapper… 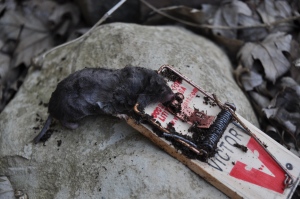 I caught this little rascal and his partner a few days after we learned about integrated pest management at farm school.  I was out looking at the cold frame, checking on some seeds and seedlings I’d set out when I discovered tunnels running through the soil with a few big holes on the sides. I knew immediately that we had a problem and unlike in the past, I wasn’t willing to live with it. It was us against them. I ran to the hardware store, picked up some mousetraps, and set them out with a bit of peanut butter bait. Within 12 hours I’d caught my first furball. I immediately reset the trap and within 2 hours caught another. We haven’t had any problems since then.

I have never killed a mammal before. Caterpillars, ants, beetles, stinkbugs for sure, but nothing with ears, and eyes, and claws. Nothing with body parts that resembled my own. My initial reaction was a combination of nausea and elation. But the more I read about voles, the less guilty I felt.

See, for example, this from Wikipedia:
“[Voles] can have five to 10 litters per year. Gestation lasts for three weeks and the young voles reach sexual maturity in a month. As a result of this biological exponential growth, vole populations can grow very large within a very short period of time. Since litters average five to 10 young, a single vole can birth a hundred more voles in a year.”

I figure catching these two saved me, and Thompson, from having to catch another 98. I’m sure he’ll find someone else to chase down. 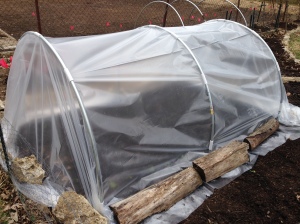 Thanks to some help from a few good friends, we got our first quick hoop (or low tunnel) planted out and erected today. It isn’t on the farm property since it’s still too cold and damp to till the new beds on that side of the fence, but this experiment will certainly inform the work we do there in the fall and next spring. This hoop covers 2/3 of one of the raised beds we’ve been using at the house. Today, we loaded it with spinach, mizuna, beets, and kale for an early spring salad mix. If all goes well, we’ll have a few fresh greens for our Passover seder plate.

Hoping to make a journey to Peace, Love, and Freedom Farm this week for a tutorial on venting these mini greenhouses. Thanks in advance, Milan!

With another cold snap expected over the next few days, we took things slow and left lots of starts in the cozy cold frame. Just about the best box of jewels we can imagine. 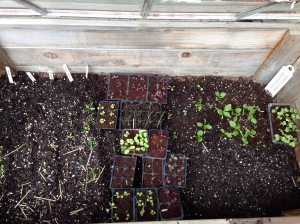 I have spent a LOT of my life in schools – as a student, as a teacher, as a student again. And so, I returned to the ivory tower, albeit the backyard, for The Ohio State University’s College of Food, Agricultural, and Environmental Sciences Ohio Master Urban Farmer Certificate Program with a mix of enthusiasm and apprehension.

I have been reading a gazillion books, blogs, and extension fact sheets in advance of the 2014 growing season. I have learned so much from these resources and wondered how much more I could possibly learn in a 21-hour program. Turns out I learned a lot, the least of which is how much more there is to learn. As with any educational experience, the presentations in this series opened windows for me onto issues and ideas I’ll need to spend more time exploring on my own. Now I know more of the questions I need to ask, even if I can’t answer them right now.

As a doctoral student you learn to be an autodidact. You have to. Noone else is studying the exact same thing as you. Same goes for artmaking and, it turns out, urban farming. 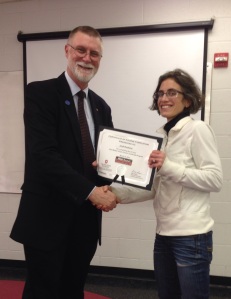 Receiving my certificate of completion from Dean Bruce McPheron. Must note I did not do a formal diploma hand-off for either my Master’s of Doctoral degree so I had to chuckle at the formality of this scene.

[I would be remiss not to briefly mention the topics of our last session of farm school. Good Agricultural and Handling Practices (GAPS), zoning, and legal issues related to urban farming. I hope to complete a full GAPS training program later this year to ensure that our produce is the highest quality it can be and safe for whatever lucky folks wind up consuming it. I also learned a few things about what we clearly can and cannot do in the name of urban farming within the boundaries of the City of Columbus. Best advice of the night: Be sure your project looks as beautiful as it can be to ensure neighbors don’t get upset with you and, add talk to your insurance provider about options for food activity coverage.]

When you are young and very inexperienced, your attractions tend to lean towards those with pretty faces and good physiques, such as strawberries and corn. Thinking back now, such flings now seem somehow trivial or superficial. Give me strength and character over looks any day.
– Victoria Renoux, For the Love of Garlic

This is it. Our last bulb of garlic from last year’s garden. 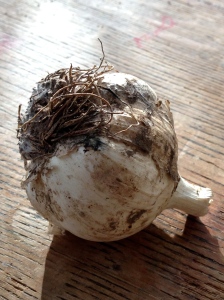 I knew this day would come, but I didn’t anticipate how bummed I would be. The only thing left to do now is get out in the yard and tend the garlic we set in place in November and hope it will grow to be powerful and potent by the time we harvest it in July. (That and head to the winter farmer’s market with fingers crossed that someone there has something tasty to get us through the next 3 months.)

Put 40 amateur urban farmers in a room with an Extension Educator to talk about vegetable production planning, and it’s bound to get personal. Everyone has a pet product they want to know how to grow better. And so it was Wednesday night at farm school. One person asked why her onions never get much bigger than a golf ball. Another wanted to know what was eating her radishes. I wanted to know how to keep the flea beetles off my arugula.

Jacqueline Kowalski, who also led our session on soil, did a nice job balancing these queries with her prepared remarks about vegetable production planning, tomato production (yes, this was a presentation onto itself – they are that popular!), and plant nutrition. As with all the other sessions, I heard some things I knew before, but from a new perspective, and had my mind opened to new things I’ll need more time to consider and explore.

Jacqueline likes to teach through problems and for this session she presented us with questions we answered by looking up information in the Johnny’s Selected Seeds catalogue. I found myself drifting from the assignments – for example, “You have an order for 500 Wee-B Little, 500 Snowball, and 500 Baby Bear pumpkins. How many plants do you need to grow?”or “What are the best lettuces to grow in the summer?” – to drooling over the season extension supplies featured in the back of the book. I returned to the group consciousness for the answers to our assigned questions and learned some new strategies for reading the seed catalogues and analyzing and selected varieties to grow. Then, when I got home I placed a great big order for row covers and and other supplies that have been on our list through Johnny’s website.

We talked at length about starting seedlings, intercropping, succession planting, crop rotation, and fertilizers. So much interesting and useful information to refer back to and share with you all as the season grows on.  Hard to believe, but next week is the last session of farm school.

Finally. It’s been warm enough for three days in a row to go outside with no coats! Our bikes are out again, as well as our shovels. The soil finally thawed deep enough to get our soil sample ready to send down to OSU for testing. (More on our burgeoning partnership with Kerry Ard and the School for Environmental and Natural Resources later…) The test will help us understand what is, and what is not, in our soil at this point and how to amend it to make it the most hospitable home for our plants as possible. First sign of good news; we found tons of earth worms! 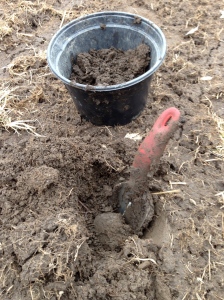 Softer soil meant we were also finally able to push our low tunnel hoops down far enough into the ground to stabilize them. They are set in the raised beds on our side of the fence for now but, if all goes as planned, we’ll be getting a BIG dump of compost at the end of the month and will install some over the fence as well. We’ll be having a few gorgeous days early this week that will be great for planting out the seedlings we’ve been hardening off (see below). Though we’re wondering, should we put them out there with snow and ice in the forecast for Thursday? Gotta love Ohio in March! 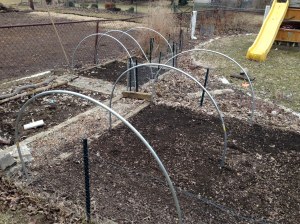 If all goes as planned, we’ll be able to serve our CSA members a sneak peak of what’s coming their way during our upcoming work days!

“To see things in a seed, that is genius.” Lao Tzu 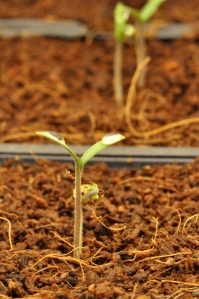 There’s snow on the ground, AGAIN. But being around these guys in the basement, you’d think it was spring. 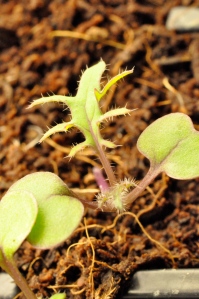 Four days ago I planted some cucumber seeds, among others. I placed the tray on the DIY Warming Mat Dan and I made a few weeks ago.

I peaked under their saran wrap blanket this morning and saw nothing. This afternoon, this. 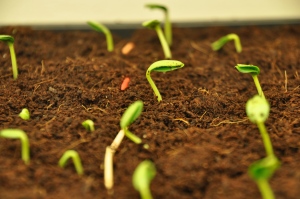