One of our goals at Over the Fence is to find ways to produce fresh food throughout the year. To this end, we consulted the first name in North American season extension, Eliot Coleman. After traveling to Europe to research year-round crop production and conducting experiments on his own land in Maine, he developed a variety of techniques for covering crops, overwintering seedbeds, and winter harvesting. Anytime you speak with someone who is trying harness Mother Nature’s more subtle powers, you’re likely to hear his name. We’d love to visit his aptly named Four Season Farm. Someday… In the meantime, we’ve seem some of his ideas in action around Columbus at Swainway Urban Farm, Harmonious Homestead, and Peace, Love, and Freedom Farm.

After reading as much of Coleman as we could get our hands on, we purchased 20 – 10 foot lengths of 1/2″ EMT and borrowed a bending tool to make our first low tunnel hoops last winter. You can read about that process here. We experimented with them a bit in the spring for an early harvest, but didn’t have much luck. We needed to start earlier, producing a fall garden that could evolve over-winter. This year we were ready.

In late August, we got a variety of cold-hardy seeds into the ground and sprouting – kale, arugula, swiss chard, spinach, scallions, beets, carrots, tatsoi, and a variety of mustards. We tried corn salad, or mache, a Coleman favorite for winter harvest but after two rounds of planting saw no germination and gave up. For now. By September we had two full rows of greens going just as strong as we had in the spring. We’re eating from them everyday, occasionally sharing with CSA friends though at this point we are selfishly relishing the fruits of our experiment. 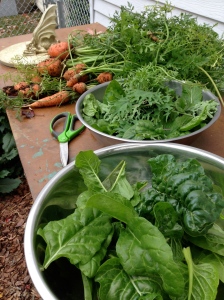 Last week, in anticipation of our first overnight frost, we covered the beds with our low tunnel hoops and 6-mil greenhouse plastic. The plastic is secured with clamps and, for the time being, held down on the ground with burlap coffee sacks. Something a bit heavier will likely be in order as it gets colder and windier.

A corner of the tunnel. Note the moisture dripping down the sides!

A quick temperature experiment showed that on a partly sunny day in the mid-forties, inside the tunnel was just above sixty. Yesterday was unseasonably warm, in the low sixties. We didn’t measure the temperature inside the hoop, but it felt warm and smelled of rich, damp earth. A true joy to behold in early November.

Hope to keep these going at least through our Thanksgiving feast! We’ll let you know how it goes.

This past fall we were on a tour at Swainway Urban Farm when our pal Milan, from Peace, Love, and Freedom Farm, asked Joseph Swain who inspires him. It was a great question and without hesitation, Joseph cited Eliot Coleman, the guru of Four Season Farming. I was somewhat familiar with Coleman’s work from articles he published in Mother Earth News, but we promptly checked a few of his books out from the library and haven’t looked back.

In Four Season Harvest (1999), Coleman offers advice on sowing seeds and raising seedlings in the coldframe. Knowing full well we are in for a few more weeks of very cold weather, we decided to give his method a try today as temperatures soared above 50. As promised, I picked up a soil thermometer and found the soil was fluctuating between 45-60 degrees for the past few days. Perfect for kale, beets, onions, chard…

With the coldframe already cleared of old growth and the soil smooth, we laid a 2-3 inch blanket (about 1 yard) of Happy Frog Potting Soil over all but the small section where we transplanted some seedlings earlier in the week. We set the seeds down in well marked rows and gave them a drink. And now, we wait.

It used to be if I heard the term “seedbed,” my thoughts turned to performance artist Vito Acconci’s (1972) work of that title. If you don’t know it, look it up. (Just be warned, this work is not appropriate for all readers.) I won’t go into it here except to say, that I have new understanding of the term. These seeds are warm and cozy and we’re going to do all we can to keep them that way.

[Quick note on the transplants. They seem to be doing okay. We moved a few straw bales that were lying around to the west and southwest sides of the coldframe as a windbreak to help these last few weeks of winter. The transplants aren’t growing as fast as the seedlings still sitting in the kitchen, but they are holding their own, gaining inner strength and waiting to flouirsh as soon as temperatures stabilize. As soon as the grow lights we got are installed, we’ll move some of the guys on the windowsill under there and then they will really start to take off. Can’t wait!] 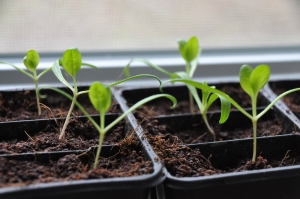 Check out our “true leaves!”

This sign is largely aspirational at this point, but we’re joining the @homegrownnationalpark movement. Conservation biologist Doug Tallamy has been a huge inspiration in our drive to eradicate our lawn and plant more native species (nearly 2 dozen new ones this season, so far….) Check out one of his books or listen to a talk. Prepare for your mind to be blown and to never see your local landscape the same. Thanks - once again - to @bernadettsfarmacy for directing us to Tallamy’s work. #shrinkthelawn #bringingnaturehome #plantnative #supportbiodiversity #backyardconservation #womensworkwednesday
@junehambachmusic playing through 11:30. Come on over!
Free maple seeds with every purchase. Now through noon! #plantsale #seedlings
For your consideration: Hyacinth Bean. #sproutingseeds #seedsavers #hyacinthbean #rabbitears
Boxing pre-orders and sending them out into the world. What a joy! See you at the 6th Annual Pollinator Lovers Plant Sale and Open House with @bernadettsfarmacy Saturday from 10am-noon. #614farms #soilsisters #43214 #homegrownnationalparks
For your consideration, the humble dandelion, beautiful and beneficial to humans and insects alike. #dandelion #pollinatorgarden #dontpulltheweeds